The Carolina Civic Center Historic Theater is a beautifully-restored treasure listed on the National Register of Historic Places that offers visitors a unique and visually stunning experience. The theater is located at 315 North Chestnut Street in the heart of downtown Lumberton. First opened in 1928 as a vaudeville and silent film house, the theater offers a wide array of programming including live touring performances, original productions, art exhibits, films, special events and rentals.
Home / News / Uncategorized / “Spotlight on Local Talent” Performance Series, Quarantine Edition 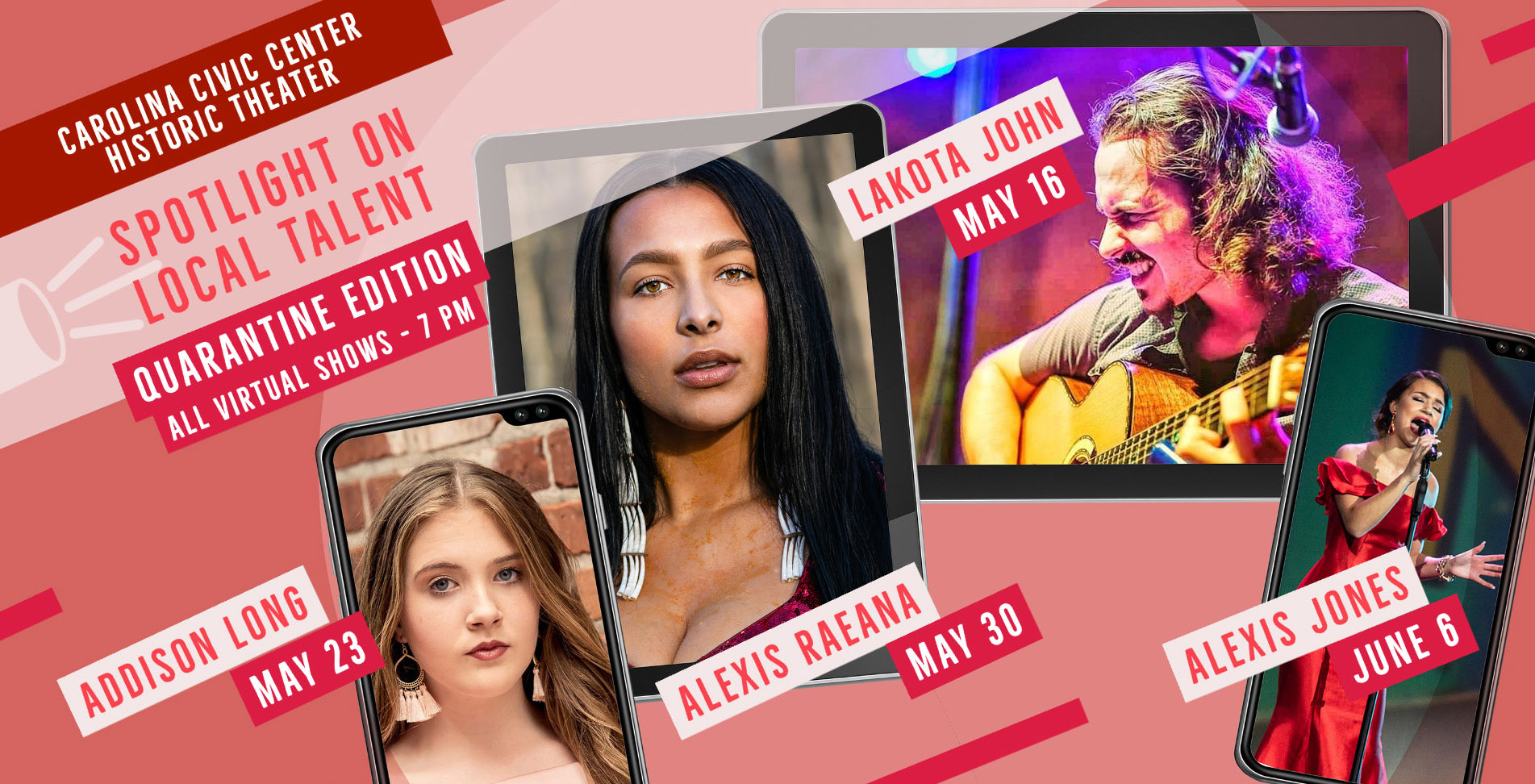 The Carolina Civic Center Historic Theater, located in downtown Lumberton, NC, is presenting a series of on-line concerts while its live performances are being rescheduled to the 1920-21 season due to COVID-19 social gathering restrictions.

These performances are being screened on the theater’s Facebook page at “Carolina Civic Center Historic Theater” ‪at 7pm on May 16, 23, 30 and ‪June 6, and subsequently will be available for viewing on its web site at www.carolinaciviccenter.com.  Additional performances may be added in the near future, so please go to the web site for all updates.

Lakota John often is referred to as an old soul with a love for the blues. He is a talented musician from Southeastern North Carolina, who grew up listening to his dad’s music library. At 6 years old he picked up harmonica, and at age 7 guitar. LJ learned to play guitar left-handed, in standard tuning, and was intrigued by the sound of the slide guitar. At age 10, he bought himself a glass slide, placed it on his pinky finger, and he has been sliding over the frets ever since.

Lakota John blends traditional styles of the Roots, Blues, Ragtime and Jazz with slide guitar, banjo, and mandolin. He adds in a bit of harmonica, and mixes in part of his Indigenous heritage with sounds of the Native American flute. He has been nominated for an American Music Award for Best Blues Recording, and recently won a Carolina Music Award in the Best Americana/Bluegrass Category. He won first place in the 2019 Road to Memphis PBPS Blues Challenge Solo/Duo Competition and made 2020 semifinals in Memphis at the International Blues Challenge.

Lakota has opened for, or shared the stage with, renowned Native artists Pura Fe, Blues icon Taj Mahal, Native American Blues Rocker Keith Secola, American Songster Dom Flemons, to name a few. He tours nationally and internationally, including selected performances at the John F. Kennedy Center and the Library of Congress in Washington, D.C., performances in San Bernardino CA, Albuquerque and Santa Fe NM, and a recent tour in Italy, Switzerland, and Canada.

Addison Laken Long is a thirteen-year-old eighth grade student at Clarkton School of Discovery who quickly is becoming a powerhouse vocalist. She has performed in the theater’s annual “A Robeson County Christmas Show” for the past 5 years.  Addison’s theatre experience includes performing as “Little Red Riding Hood” in Into the Woods, as “Duffy” in Annie, and as “Elsa” in Frozen Jr. The trio Addison sang with at My Time To Shine – Talent Competition in 2019 was awarded People’s Choice Award and she recently placed second in the state for Individual Talent at the North Carolina State Jr Beta Club Convention. She is a member of the jazz and hip-hop competition Teen Superstars dance team for Amy’s Academy of Dance Arts.

An enrolled tribal member of The Lumbee Tribe of North Carolina, Alexis Raeana defies the odds. From the swamps of rural Robeson County, Alexis has always called Pembroke “home”. Alexis held the title of Miss Lumbee in 2015, since then she has graduated from the University of North Carolina At Wilmington with a bachelors degree in Environmental Science and a concentration in Conservation and Geospatial informations systems. She also appeared on last seasons American idol where she got the golden ticket to Hollywood. Alexis currently runs her own business Alexis Raeana LLC , which provides elite entertainment, makeup artistry, modeling, public speaking and several other services. Alexis  is the North Carolina Eastern Youth organizer for the alliance for climate education. She recently debuted her new single “Keep My Memory” featuring Charly Lowry available now on all music streaming platforms.

Alexis Lane Jones is a talented, passionate, and soulful singer. She is currently a senior at Purnell Swett High School, and will attend UNCP in the fall.  Alexis is the 2019 “My Time to Shine” talent competition winner at the Carolina Civic Center.  She performed in the “Women of the Dark Water” play at the Cape Fear Regional Theater.  Alexis has been invited to sing at various community events for the Lumbee Tribe, the Town of Pembroke, UNC Pembroke, and many more.  Perhaps her most rewarding experiences have come from traveling throughout the county to sing at local churches.