The Carolina Civic Center Historic Theater is a beautifully-restored treasure listed on the National Register of Historic Places that offers visitors a unique and visually stunning experience. The theater is located at 315 North Chestnut Street in the heart of downtown Lumberton. First opened in 1928 as a vaudeville and silent film house, the theater offers a wide array of programming including live touring performances, original productions, art exhibits, films, special events and rentals.
Home / History of the CCC

History of the CCC

History of the CCC

Located in the heart of historic downtown Lumberton, the Carolina Civic Center facility opened its doors for the first time on June 18, 1928 as a vaudeville and silent film house. Then known as the Carolina Theatre, and owned by the Lumberton Theatre Company, it served the City of Lumberton and Robeson County as the area’s primary cultural arts center for more than four decades.  With the nationwide flight from downtown areas during the late 1960’s and 1970’s, the Carolina Theatre closed its doors for business in 1975. Averting plans to demolish the theater and replace it with a parking lot, a determined effort to save the historic structure by a group of local citizens resulted in the facility reopening June 18, 1985 as the Carolina Civic Center. The theater is listed on the National Register of Historic Places.

“The Carolina Theater in Lumberton is a three story brick and terracotta structure that expresses the exuberant classicism which was a feature of many public buildings built in America between World War I and the Depression.  It was constructed during a boom period for the town and nation. Its quality of architectural detail and construc­tion technique are equal to similar buildings in larger, wealthier cities.  Designed in the Italian Renaissance style, the theater ls a stage setting for its interior uses.  The main façade through which one enters the auditorium is a well articulated composition using tapestry brick, rough cut joints and terracotta quoins, rusticated pilasters, window frames, cornice, and paneled and balustered parapet.  Along the Fourth Street side, however, architectural style gives way to a purely functional arrangement of windows and doors. Constructed as a combination of theater and doctors’ offices,  the  two   uses  are reflected  in the                            two opposing facades.”

The Civic Center largely had been underutilized for the past decade due to deterioration of its climate control system and performance equipment. The City of Lumberton’s efforts to secure a federal loan for the renovation have been matched by ongoing fundraising conducted by the Carolina Civic Center Foundation. The Carolina Civic Center reopened to the public in February 2009, following a two-year, $2 million major renovation and upgrade project supported by public and private funding.  The improvements made possible through this renovation have enableb the Civic Center to broaden its programming and more fully serve the public.

While many of the improvements are “behind the walls” others will be very visible to the public, including: 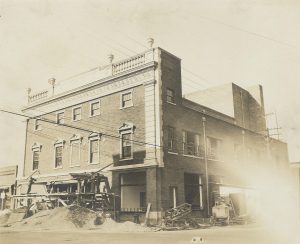 Exterior of theater in 1928 during construction.

The 2/8 (2 manual/8 rank) Robert Morton Theatre Organ currently residing in the Carolina Civic Center, Lumberton, NC was originally installed in the National Theatre in Greensboro, NC in 1922. A sister organ was installed in the Carolina Theatre in Greensboro around the same time – this organ continues to play in its original setting. In 1939 the Center Theatre opened in downtown Durham and the National organ was relocated to Durham where it lived until 1967 when the Center was demolished. Just a few days before demolition, a group of organ enthusiasts was finally granted permission to remove the organ before the wrecking ball hit. The Morton was saved! The organ then spent several years in the residence of the late Dr. Paul Abernethy in Burlington, NC before he replaced it with a larger instrument.

The smaller organ was stored and found its way to Lumberton during the 1980’s thanks to a lot of work by Piedmont Theatre Organ Society members and the support of the community and the CCC Board of Directors. Funds were raised to purchase a console lift, prepare the chambers in accordance with local fire and building codes, and to complete the installation. The organ has been upgraded to use a computerized relay system to control the several thousand pipes and other devices located in the 2 chambers to the left of the stage.

Time and other factors took their toll on the keyboards, which were original to the 1922 console, which rendered the console inoperable for the last several years. The organ was playable only from the computer for that time period.  In 2015, new keyboards were custom built and installed making the organ playable again by live organists thanks to the CCC and its supporters, especially Mayme and William Tubbs, Mark Andersen and Mac Abernathy. 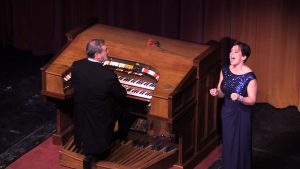 Mark Andersen at the organ accompanying Laura Britt Morgan during a concert at the theater.