The Carolina Civic Center Historic Theater is a beautifully-restored treasure listed on the National Register of Historic Places that offers visitors a unique and visually stunning experience. The theater is located at 315 North Chestnut Street in the heart of downtown Lumberton. First opened in 1928 as a vaudeville and silent film house, the theater offers a wide array of programming including live touring performances, original productions, art exhibits, films, special events and rentals.
Home / Events / The Doo Wop Project 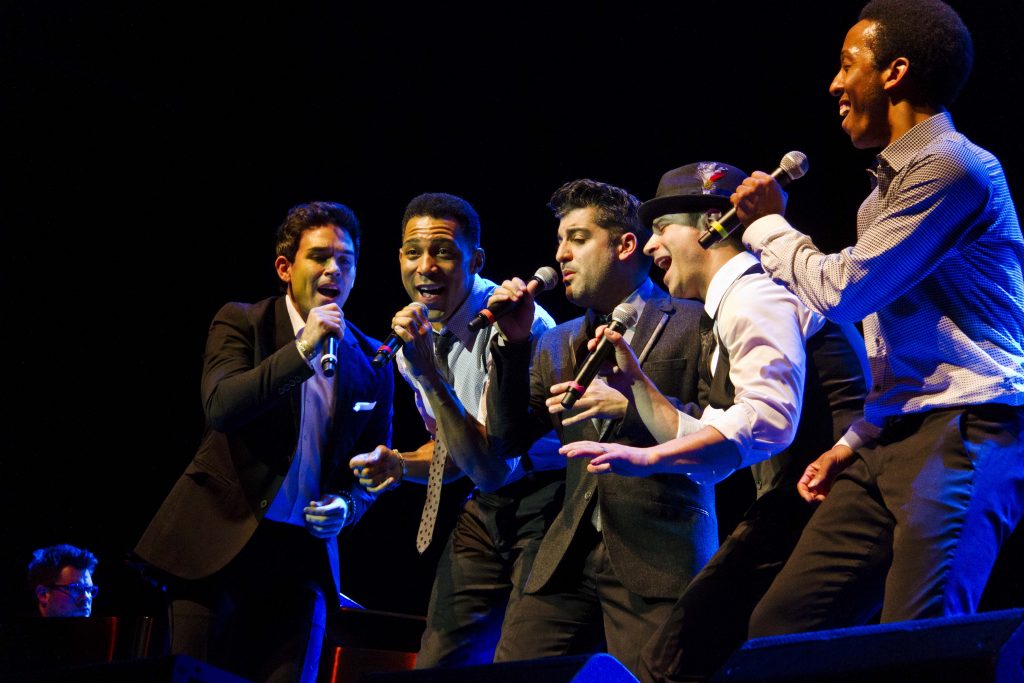 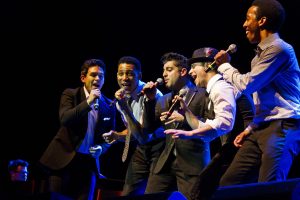 The Doo Wop Project concert scheduled for Friday Oct. 14 has been rescheduled to Friday March 3, 2017. All previously-purchased tickets will be honored for that show with same seating.

From Bop to Pop…Evolution of a Sound

The Doo Wop Project begins at the beginning, tracing the evolution of Doo Wop from the classic sound of five guys singing tight harmonies on a street corner to the biggest hits on the radio today. Throughout the show DWP takes audiences on a journey from foundational tunes of groups like the Crests, Belmonts and Flamingos through their influences on the sounds of Smokey Robinson, the Temptations, and the Four Seasons all the way to Michael Jackson, Jason Mraz and Amy Winehouse. These amazing singers are backed by a full band.

Featuring stars of Broadway’s smash hits Jersey Boys and Motown: The Musical with their hot band, The Doo Wop Project brings unparalleled authenticity of sound and vocal excellence to recreate – and in some cases entirely reimagine – some of the greatest music in American pop and rock history.  Your audience will enjoy a night filled with harmonies and classic ‘60s hits such as Randy & The Rainbows’ “Denise”, Thurston Harris’ “Little Bitty Pretty One”, The Skyliners “Since I Don’t Have You”, The Capris’ “Morse Code of Love”, and many more.  The show also includes doo-wop-inspired renditions of contemporary songs such as Amy Winehouse’s “Valerie”, Michael Jackson’s “The Way You Make Me Feel”, and Jason Mraz’s “I’m Yours.”

PARKING UPDATE:  DUE TO THE ANNUAL RUMBA ON THE LUMBER FESTIVAL, COURTHOUSE PARKING AS WELL AS FOURTH STREET AND ELM/CHESTNUT STREETS BETWEEN FOURTH STREET AND COURTHOUSE WILL NOT BE AVAILABLE. THERE IS PLENTY OF PARKING ON ALL OTHER STREETS, BEHIND THE OLD BB&T BUILDING, AROUND THE PLAZA AND IN THE CITY LOT ACROSS FROM ADELIO’S RESTAURANT (THIRD STREET) AND AT FIFTH AND WATER STREETS. TICKET HOLDERS SHOULD PLAN TO ARRIVE EARLY DUE TO THIS.

Tickets for select mainstage events can be purchased ANY TIME on-line by clicking on the "PURCHASE TICKETS NOW" on that event's web site page (there will be a convenience fee).

In person or by telephone with credit card or cash (no convenience) Noon-6pm Monday through Friday through our administrative offices on the theater’s 2nd Floor (use 4th Street entrance), or by calling the theater at 738-4339 Ext. 106.