The Carolina Civic Center Historic Theater is a beautifully-restored treasure listed on the National Register of Historic Places that offers visitors a unique and visually stunning experience. The theater is located at 315 North Chestnut Street in the heart of downtown Lumberton. First opened in 1928 as a vaudeville and silent film house, the theater offers a wide array of programming including live touring performances, original productions, art exhibits, films, special events and rentals.
Home / News / Uncategorized / 2022-23 MAINSTAGE SERIES SCHEDULE ANNOUNCED 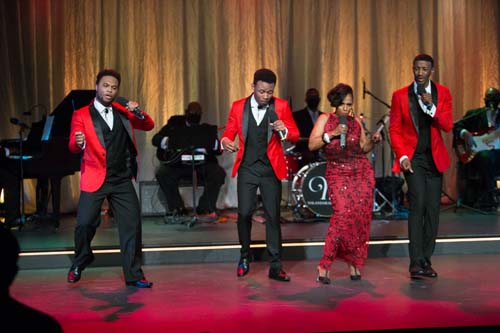 The Carolina Civic Center  Historic Theater, located in downtown Lumberton, has announced its 2022-23 mainstage series of performances. Season tickets will go on sale 1pm Monday August 8 while tickets for individual shows will be available for purchase at 1pm Monday August 15.

Tickets for the Mainstage Series can be purchased on-line by going to our web site at www.carolinaciviccenter.com.  Tickets also can be purchased in-person or with credit card or cash 1 to 5:30 pm Monday through Friday through our administrative offices in the theater’s second floor (enter on Fourth Street side), or by calling the Civic Center at (910) 738-4339. When available, tickets can also be purchased at the door. Theater lobby box office opens for ticket sales one hour prior to performance.

A Season Subscription DISCOUNT of 20% off the Individual price is available if you purchase five or more events at the same time through our box office. Senior, Military, student discounts and Group Rates are also available for most events.  For Group Rates and Season Tickets, please call our box office at (910)738-4339. All ticket prices include 7% sales tax on nonprofit attraction ticket sales as required by the North Carolina General Assembly as of January 1, 2013, as well as all ticketing and service charge fees.

Please note, the theater does not guarantee the authenticity of tickets purchased from any third party reseller and recommends that tickets be purchased directly through its box office, etix.com or its website to ensure ticket authenticity and pricing.

The Neither One of Us Concert: Yolanda Rabun Sings Gladys
7pm Friday September 23

Yolanda Sings Gladys is a fun, nostalgic evening of soul music recorded by the Empress of Soul, Gladys Knight, and delivered by the talented national recording and chart-topping artist, Yolanda Rabun and her astounding band. This walk down memory lane features intensely accurate instrumental work, soaring harmonies and a top-notch live performance of celebrated songs from Gladys Knight and the Pips’ “Neither One of Us” album. The Neither One of Us Concert, touted as a “love letter to Gladys”, premiered in 2021, with rave reviews and a Broadway World nomination.

As one of North Carolina’s most beloved roots music outfits, Chatham Rabbits has swiftly emerged from the fertile Americana scene in the Triangle. The husband-and-wife duo of Sarah and Austin McCombie favors rustic, minimalist acoustic arrangements—mainly clawhammer-style banjo and guitar that showcase deftness and maturity with their songwriting. The duo has a way of connecting with their audiences that is warm and universal. Chatham Rabbits’ first album “All I Want From You” (2019) was recorded with the help of Watchhouse’s Andrew Marlin, and their sophomore album, “The Yoke is Easy, The Burden is Full”, released May 1, 2020.

Their song “Oxen” was named one of the “Top Folk Songs of 2020″ by Paste Magazine and the band has been covered by Garden & Gun Magazine, American Songwriter, and No Depression. Their ingenuity during the Covid-19 crisis led to the building of their own venue, The Burrow, and the creation of their mobile concert experience, The Stay at Home Tour, which took Chatham Rabbits to 194 neighborhoods in 2020-21. The duo is the focus of a new television limited series, “On the Road with Chatham Rabbits”, which premiered on PBS NC in May 2022.

Tickets are $20 adults and $15 students. Group discount rates of $25 each for groups of 10 or more when purchased in advance are available by contacting the box office.

This performance is partially underwritten by a grant from the Robeson County Arts Council.

The theater’s annual heart-warming holiday musical revue for the entire family features the best regional performers singing and dancing in the holidays. This year’s show features Lumberton’s own former Miss North Carolina Rebekah Revels Lowry, X-Factor Top 40 selection Brent Tyler, and other featured singers.  See the beautifully staged dancing of “The Civettes” as well as adorable performances by the show’s youth cast.  The theater will be beautifully decorated for Christmas and of course there will be appearances by Frosty the Snowman, The Grinch and Santa Claus!  This year marks the Carolina Civic Center Historic Theater’s 11th edition of what has become the region’s most popular Christmas show.

Dustin Chapman and Ryleigh Madison are a unique uncle-niece musical duo from Whiteville, North Carolina. As two young singers with what they call “old souls,” they both incorporate traditional and contemporary country and gospel into their sound. This has helped them create an instant identity among listeners of all ages.  Using their talents to uplift others, these two travel all around the Southeast, performing at such notable events as the Carolina Country Music Festival and the Carolina Country Music Awards. Chapman is an established singer/songwriter, and is the reigning Carolina Country Music Awards’ Entertainer of the Year. Moreover, Chapman has been awarded several songwriting awards from the World Songwriting Awards and the International Singer-Songwriters Association Awards, including 2020 Male Single of the Year for his song “Plus One.”  The Catawba College graduate was also selected to be a contestant on season 19 of American Idol.

Ryleigh has wowed many with her powerful vocals and the outstanding way she fully connects to each lyric in a song, making each listener believe the power behind what she is singing. The South Columbus High School student was a semi-finalist on the historic 20th season of American Idol, which is currently airing on ABC Network. These up-and-coming country singers have both been receiving great attention following the release of their single, “Family Thing.” This song has impacted the Positive Country Radio format, where it is currently #28 on the CDX Nashville Positive Country Charts. It is scheduled to be featured on CMT Network’s Website and has been featured on several other country music networks.

Tickets: $20 adults and $15 students.  Group discount rates of $25 each for groups of 10 or more when purchased in advance are available by contacting the box office.

Denise Tichenor has been a professional singer/performer for over 30 years. During her years in the entertainment industry, she has been a regular lead singer for the Bobby Jones Gospel Hour on BET Television Network for 17 years. She has also been featured in the Gospel Music Encyclopedia, “Uncloudy Days” among many of the gospel greats, such as Mahalia Jackson. She has traveled the world singing both gospel and secular in places such as Italy, Spain and Australia. Denise also continues to sing with the legendary group, Kurt Carr and the Kurt Carr Singers.

Denise just recently began her “Patti LaBelle Tribute” tour in September of 2020 and is now very excited about her Motown tribute show! The Motown Special will feature many Motown hits from artists such as The Temptations, The Four Tops, Marvin Gaye and Tammy Terrell, Gladys Knight, James Brown and many more – as well as some other Old School R&B favorites during the Motown Era that you may remember and continue to enjoy! This show features a full band and singer cast.

The Civic Center’s popular –and very competitive- talent competition.  Includes all categories of talent – from singing and dancing to instrumental and more.  Auditions will be held to determine who gets to showcase on our stage, with cash and gift prizes going to the top contestants and a grand prize of $1,000. It’s more than a competition; it’s a great show!

This energetic and interactive Beatles Experience is the nation’s most innovative and unique show utilizing the works of the legendary pop group. Through requests and memories, Yesterday and Today tells the audience’s story using the Beatles catalogue. The band, anchored by brothers Billy, Matthew and Ryan McGuigan, performs as themselves and leave the song choices completely up to the audience – the set list is created as the show happens, while the reasons the audience chose those songs makes up the narrative for the evening. Every show is different, every show is interactive and Yesterday and Today: The Interactive Beatles Experience proves that the Beatles music truly is the soundtrack to our lives.

Directed by the theater’s resident artist, Kendrix Singletary, Disney’s Beauty and the Beast, the Broadway Musical is a Disney stage musical with music by Alan Menken, lyrics by Howard Ashman and Tim Rice, and a book by Linda Woolverton. With favorite and familiar songs such as “Be Our Guest,” “Home,” “Human Again” and “Beauty and the Beast” audiences will see this “Tale as Old as Time” in the spectacular, special way that you’ve come to expect from the artistic team at the Carolina Civic Center Historic Theater.