The Carolina Civic Center Historic Theater is a beautifully-restored treasure listed on the National Register of Historic Places that offers visitors a unique and visually stunning experience. The theater is located at 315 North Chestnut Street in the heart of downtown Lumberton. First opened in 1928 as a vaudeville and silent film house, the theater offers a wide array of programming including live touring performances, original productions, art exhibits, films, special events and rentals.
Home / Events / After the Flood Variety Show / charly 3 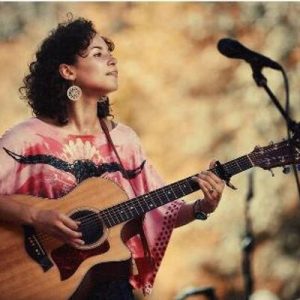 Charly is a singer-songwriter from Pembroke, North Carolina, with Native American roots from the dark swamps of Robeson County. For years, Charly has attained regional and national success as both a solo artist and lead singer of spiritual rock and soul band, Dark Water Rising. In addition to performing with Dark Water Rising and The Ulali Project, she often shares the stage with the British funk/soul band, “The New Mastersounds”. In 2004, Charly had the opportunity to compete on the wildly popular television show, American Idol, ending up as a Semi-Finalist. Recently she sang the National Anthem for Governor Cooper’s Inauguration.